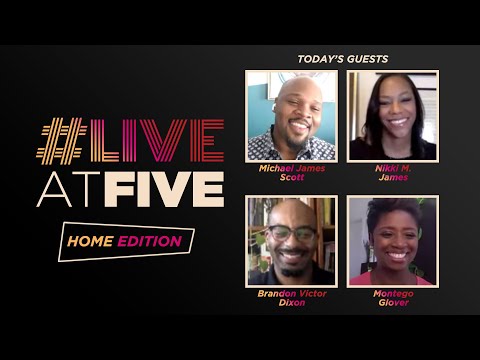 "What Power Do You Have?" by Mo Brady

Linked From www.theensemblist.com at 10:35AM

'Moulin Rouge!,' 'King Kong' and the View from Down Under by Variety

Global Creatures CEO Carmen Pavlovic on what it's like producing theater around the world right now, and what comes next.

Linked From traffic.megaphone.fm at 04:00AM

Linked From Playbill at 01:09PM

Linked From BroadwayWorld at 05:48AM

Eddie Perfect is working 9 to 5 and 5 to 9! The busy actor and songwriter, who made a double Broadway debut this past season with his scores to King Kong and Beetlejuice, will return to acti…

Linked From Broadway.com at 04:06PM

​Top College Theatre Programs You Might Not Know, but Should; Part 2, the Northern US Schools by Performerstuff

Top College Theatre Programs You Might Not Know, but Should; Part 2, the Northern US Schools Written by Michelle J. Evans February 19, 2020 As a professional acting and college audition…

Linked From performerstuff.com at 10:12AM

The two-time Tony nominee shares behind-the-scenes secrets from his career lighting everything from A Doll's House to King Kong.

A few weeks ago over at Broadway Sessions we were joined by an incredible lineup of artists for our Black History Month Celebration! It was an amazing night full of beautiful moments from ev…

Linked From BroadwayWorld at 02:30PM

Photo Flashback: Carrie Fisher After a Performance of CENSORED SCENES FROM KING KONG in 1980

Today we're taking a look back into our archive with this flashback photo of Carrie Fisher after a performance of Censored Scenes From King Kong in 1980.

Linked From BroadwayWorld at 10:11AM

Among other works, McDonald is recognized for her review of Broadway's 'King Kong.'

Linked From American Theatre at 12:33PM

BWW TV: Have Yourself a Merry Little Christmas at Broadway Sessions!

Happy Holidays from Broadway Sessions! Our Annual All-Star Holiday Show this past Thursday the 19th was such a joyous occasion. Belting, tapping, singalongs and laughing- oh my! Our All-Star…

Linked From BroadwayWorld at 01:01PM

It’s time for Beetlejuice to move on from Broadway’s Winter Garden Theatre (though no word yet on whether their ghosts might stick around to haunt the new owners). On Monday, producers …

Linked From Entertainment Weekly at 06:01PM

Linked From Broadway.com at 04:03PM

Manhattan Theatre Club’s world premiere of Richard Greenberg’s The Perplexed has completed its cast with Gregg Edelman (City of Angels, Into the Woods) and Eric William Morris (King Kong…

Linked From Deadline at 03:01PM

"I Like To Know Very Real Things About People." by Angela Tricarico

Linked From www.theensemblist.com at 02:47PM

HAPPY HALLOWEEN, THEATER FANS! At any given time, Broadway is full of monsters - and I'm not talking about mean directors, cheap producers or screaming divas. Over the years, the Rialto ha…

Long before puppets became common in Broadway and Off-Broadway shows, (“Avenue Q,” “Hand of God,” “King Kong”) there was Audrey II, the star of “Little Shop of Horrors.” In a…

Linked From stagebuddy.com at 11:22PM

Gossip Alert! We Caught the King Kong Puppet and the Audrey II Puppet Getting Steamy at a Diner by Broadway Beat

by Edward Precht. @pertoltprecht. NEW YORK, NY - Rumors and romance swung through the Great White Way last night after paparazzi snapped a pic of the King Kong Puppet - last seen as the titu…

Linked From www.thebroadwaybeat.com at 11:05AM

Full casting has been announced for the upcoming world premiere of Mrs. Doubtfire, a new musical based on the popular film, appearing at Seattle's 5th Avenue Theatre this winter. The previou…

Linked From Broadway.com at 02:42PM

The Friday 5: Broadway Boats by JK

Yesterday's 58th anniversary of Noel Coward's musical, Sail Away got me to thinking about all the boats I've seen on Broadway. It is amazing how many I've seen, really. Now, that's stage ma…

Linked From www.jkstheatrescene.com at 10:48AM

Sunday: Twentysomethings, Off the Grid and ISO Meaning by Elysa Gardner

Linked From nystagereview.com at 09:59PM

by Edward Precht. @pertoltprecht. This Sunday is the 33rd annual Broadway Flea Market - a yearly merch extravaganza where theaters and shows sell rare and niche memorabilia to benefit Broadw…

Linked From www.thebroadwaybeat.com at 11:46AM

A brand-new musical adaptation of the classic novel 101 Dalmatians will debut as part of the upcoming season of Regent's Park Open Air Theatre in London. The new tuner, featuring an original…

Linked From Broadway.com at 02:42PM

A brand-new musical adaptation of the classic novel 101 Dalmations will debut as part of the upcoming season of Regent's Park Open Air Theatre in London. The new tuner, featuring an original…

Linked From Broadway.com at 12:06PM

Linked From www.thebroadwaybeat.com at 11:06AM

Broadway pianist Justin Brown, age 26, has been arrested for trying to have sex with a minor, according to the New York Post. Brown has worked as a rehearsal pianist for Dear Evan Hansen and…

Linked From BroadwayWorld at 06:24PM

Broadway box office was up a bit last week, despite being down a show from the previous week. With a very slight 2.4% rise, the 23 productions grossed a combined $28,652,877, with attendance…

Linked From Deadline at 04:26PM

Much has been made of the closing of five Broadway shows in the past two weeks: Be More Chill, King Kong, Pretty

Linked From The Stage Registration at 02:00AM

It was a bittersweet week on Broadway as The Cher Show, Pretty Woman and King Kong all played final performances on August 18. Audiences packed into the Neil Simon, Nederlander and Broadway …